Grand Supercycle: multi-century
Supercycle: multi-decade (about 40–70 years or longer under and Elliot Extension)
Cycle: one year to several years (or even several decades under an Elliott Extension)
Primary: a few months to a couple of years
Intermediate: weeks to months
Minor: weeks
Minute: days
Minuette: hours
Subminuette: minutes

I personally believe the Dow is in Grand Supercycle Wave V that started in 2009 and will end in a blow-off “phase transition” top some time in the next decade and ultimately usher in the end of American global hegemony and reign as the financial center of the world starting in 2032 and then for the next 300+ years. 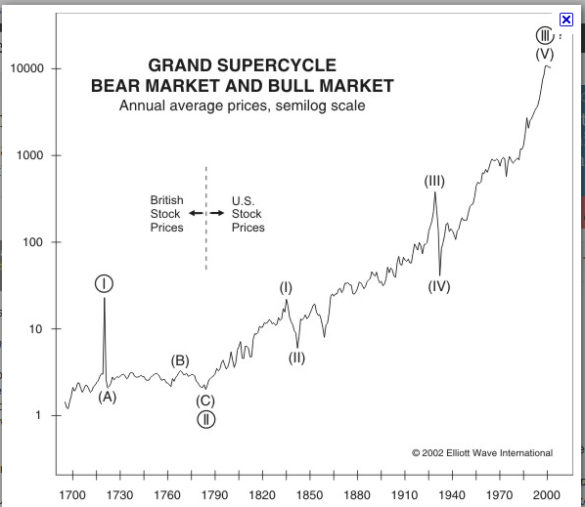 Here is a link the “Trader: The Documentary” featuring Paul Tudor Jones and his use of Elliot Wave Theory to trade the markets. The password is “view”. http://documentaryvine.com/video/trader-the-documentary/

Here are some musings on Super Cycles from Tony Caldaro at https://caldaro.wordpress.com/2010/02/14/grand-super-cycle-revisited%E2%80%8F/

“The most common perception about a GSC (Grand Supercycle) is the one the RN Elliot described during his discovery of the Wave Principle. In basic terms, he determined that the cycle began in 1776 with the founding of the 13 original American states. Then from the 1776 revolutionary war he roughly counted:

Originally we had dismissed this concept due to the lack of quantitative market data. In general terms, however, recent market behavior has led us to take another look. When reviewing our favorite market chart of all time DOW 1929-2010, it is quite easy to see the cycle waves of the recent SC:

Christopher Columbus was the first European to land in the territory of what is now the United States when he arrived in Puerto Rico in 1493. The subsequent arrival of settlers from Europe began the colonial history of the United States. The thirteen British colonies that would become the original US states, were founded along the east coast beginning in 1607. Spain, France, and Russia also founded small settlements in what would become US territory. The thirteen colonies grew very rapidly, reaching 50,000 by 1650, 250,000 by 1700, and 2.5 million by 1775. High birth rates and low death rates were augmented by steady flows of immigrants from Europe as well as slaves from the West Indies. Occasional small-scale wars involved the French and Indians to the north and the Spanish and Indians to the south. Religion was a powerful influence on many immigrants, especially the Puritans in New England and the German sects in Pennsylvania, with boots from the revivals of the First Great Awakening. The colonies by the 1750s had achieved a standard of living about as high as Britain, with far more self government than anywhere else. Most free men owned their own farms and could vote in elections for the colonial legislatures, while local courts dispense justice. Royal soldiers were rarely seen.

The colonists did not have representation in the ruling British government and believed they were being denied their constitutional rights as Englishmen. For many years, the home government had permitted wide latitude to local colonial governments. Beginning in the 1760s London demanded the colonists pay taxes. The new foreign taxes on stamps and tea ignited a firestorm of opposition. The British responded with military force in Massachusetts, and shut down the system of local self government in what the colonists called the “Intolerable Acts”.

After fighting broke out in April 1775, each of the colonies ousted all royal officials and set up their own governments, which were coordinated out of Philadelphia by the Continental Congress. The American Revolution escalated into all-out war. Despite local King George loyalists, the new nation declared independence in July 1776 as the United States of America. After Americans captured the British invasion army in 1777, France became a military ally, and the war became a major international war with evenly balanced forces. With the capture of a second British invasion army at Yorktown in 1781, the British opened peace negotiations. The Treaty of Paris in 1783 proved highly favorable to the new nation.